An Indian parliamentarian has introduced a Bill in the country’s parliament to allow dual citizenship for foreign nationals of Indian origin. Under the current laws, Indians have to renounce their Indian citizenship once they acquire citizenship of another country.

Draft legislation brought before the Indian parliament seeks to allow dual citizenship for millions of foreign nationals of Indian origin who currently have to renounce Indian citizenship once they become citizens of another country.

Congress MP from Thiruvananthapuram, Shashi Tharoor introduced a Bill last week to amend Article 9 of the Constitution of India that provides for automatic termination of the Indian citizenship upon acquiring citizenship of another country.

“We have the largest diaspora in the world, many of whom have migrated abroad for better opportunities. Taking a foreign passport for convenience does not make them any less Indian,” said Mr Tharoor.

According to the UN World Migration Report 2018, over 15.6 million Indians are living in other countries, making it the largest diaspora in the world, followed by the Mexicans and the Russians. 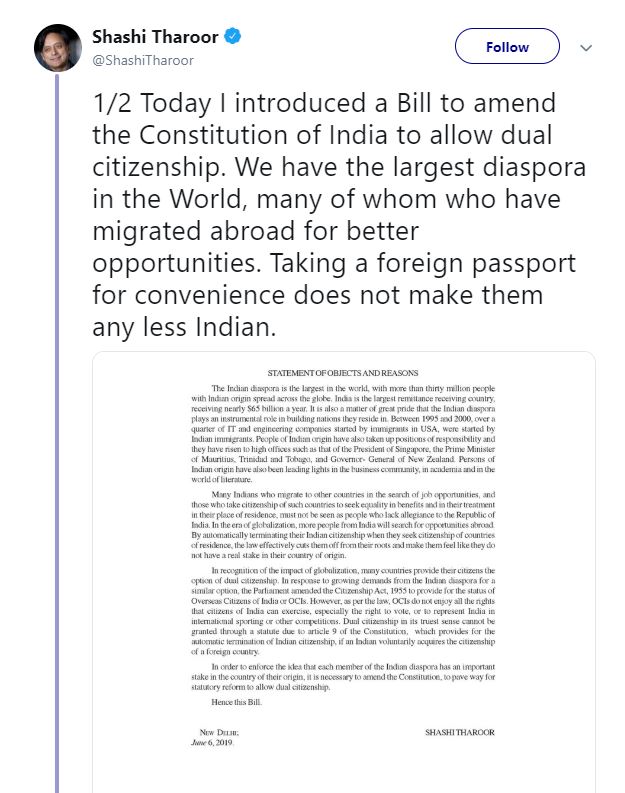 A large section of India’s global diaspora has been calling for India to allow dual citizenship. The government of India, in order to cater to some of the demands of Indians living overseas, introduced the Overseas Citizen of India (OCI) card. The OCI has been further streamlined and extensively promoted under the BJP government.

While the OCI allows foreign nationals of Indian origin to live and work in India indefinitely, they can’t vote or contest an election and don’t have the right to own agricultural land in India.

Mr Tharoor argues that the people of Indian origin, many of whom have been highly successful tech-entrepreneurs and quite a few also rose to high public offices overseas, have an important stake in India.

“In the era of globalisation, more people from India will search for opportunities abroad.

“By automatically terminating their Indian citizenship when they seek citizenship of countries of residence, the law effectively cuts them off their roots and makes them feel like they do not have a real stake in their country of origin,” he told the legislators.

Dubai-based policy consultant and writer Mohamed Zeeshan argues that while many Indians acquire citizenship of countries of their residence, they remain strongly committed to their country of origin and spread India’s global influence worldwide.

“The landmark India-US nuclear deal, for instance, was aided in Washington by strong political lobbying from the Indian-American community. In 2011, Indians in Australia helped convince the then Australian government to lift a ban on uranium exports to India,” he writes.

The UAE, the United States and Saudi Arabia are the top three countries of residence for people of Indian origin outside India, together home to about 7.5 million Indians.

Since then, migration from India to Australia has been on the rise.

Ritesh Chugh, a senior lecturer at the Central Queensland University in Melbourne says it will “open the doors” for many possibilities for Indians and India.

“Indians living abroad are already contributing immensely to India and there’s such an enormous wealth of experience that India can benefit from further. But many see this (not having Indian citizenship) as a big hurdle in making that contribution to the full extent possible,” he told SBS Punjabi.

“For example, at the moment, the research pathways are restricted to citizens alone. If this deterrent is removed, a lot of people would like to go back and work in India as opportunities grow in India,” Mr Chugh said.

According to the Indian Passport Act, it’s an offence not to surrender the Indian passport and formally renounce Indian citizenship after acquiring foreign citizenship, which may attract penalties of up to $1,050.