Today’s draw was the first all-programs Express Entry invitation round since May 1 and marked a return to a larger number of invitations.

The resulting gap of nearly a month between all-programs draws explains the high cut-off score in today’s draw.

All-programs draws are the norm under the Express Entry system and are typically held every two weeks.

When the period between these draws is extended, the Express Entry pool has more time to replenish with higher-scoring candidates and this can have the effect of raising the cut-off score.

The tie-break used by Immigration, Refugees and Citizenship Canada (IRCC) in the May 29 drawing was May 23, 2019, at 10:18:56 UTC. This means that all candidates with a CRS score above 470, as well as those with scores of 470 who entered their profile in the Express Entry pool before this date and time, received an ITA.

Today’s draw brings the total number of ITAs issued so far this year to 35,100.

Canada has increased its 2019 admissions target for the three Federal Skilled programs managed by the Express Entry system and is slated to raise them again in 2020 and 2021. 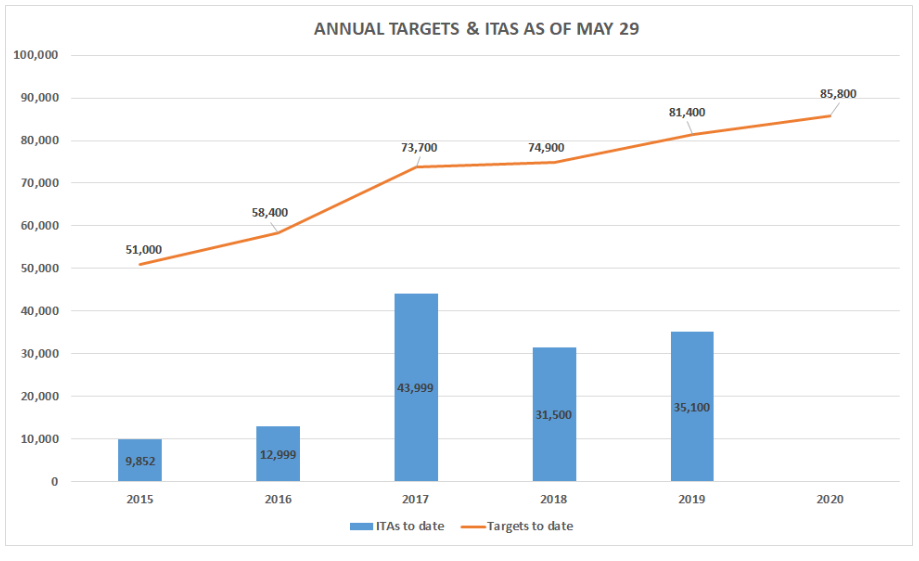 Express Entry candidates can improve their CRS score in a number of ways, with a nomination through Canada’s Provincial Nominee Program being the most valuable in terms of points.

The following are hypothetical examples of candidates who would have obtained an ITA in the May 29 draw:

John is 31 and holds a master’s degree. He has been working for four years as a business analyst outside of Canada. He took the CELPIP exam and has advanced English proficiency in all categories. His CRS of 470 would have been sufficient to obtain an ITA during the May 29 draw.

Karim and Solange are 30 and 32 years old, respectively. They both hold a bachelor’s degree and a post-secondary certificate. They both took the IELTS test and have an advanced English proficiency in all categories. Karim has been working for four years as a data scientist outside of Canada. Karim entered the Express Entry pool as the principal applicant and his CRS score of 471 would have been sufficient to obtain an ITA in today’s draw.

Lucas is 29 and holds a bachelor’s degree. He has been working for three years as an administrative coordinator outside of Canada. He took the TEF Canada exam and obtained 275 in Reading, 400 in writing and speaking as well as 330 in Listening. Lucas also has a sibling who is a citizen living in Ottawa. His CRS score of 471 would have been sufficient to obtain an ITA in today’s draw.

“Today’s high CRS cut-off is not a surprise given the draw size of 3,350 and the long duration between all-programs draws, which was two weeks longer than the norm,” said David Cohen, senior partner with the Campbell, Cohen Canadian immigration law firm in Montreal.

“Given Canada’s higher admission targets for 2019 and 2020, we expect more frequent or larger draws in the future.”