Australia is commonly regarded as running one of the world’s best ‘skilled-based’ immigration programs.

This view is based on the fact that the ‘skilled stream’ comprises around two-thirds of Australia’s non-humanitarian permanent migrant intake, as illustrated in the next chart:

…within the skill stream, about half of the visas granted were for ‘secondary applicants’ — partners (who may or may not be skilled) and dependent children… Therefore, while the skill stream has increased relative to the family stream, family immigrants from the skill and family stream still make up about 70 per cent of the Migration Programme 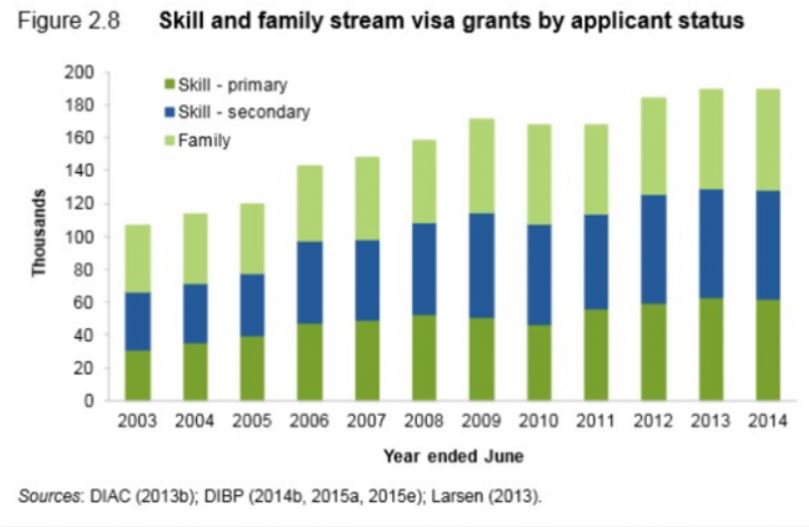 skilled migrants – both temporary and permanent – are paid below well below their Australian peers, suggesting they are mostly unskilled or semi-skilled.

The Department of Home Affairs’ Continuous Survey of Australia’s Migrants found that across all skilled visa categories, the median full-time salary 18 months after being granted a skilled visa was just $72,000 in 2016, which was below the population average of $72,900. This is an appalling result given the population average includes both skilled and unskilled workers, which obviously drags the median salary down.

In a similar vein, the ABS’ most recent Personal Income of Migrants survey revealed that the median employee income of migrants under the skilled stream was just $55,443 in 2013-14, whereas separate ABS data also showed that Temporary Work (Skilled) visa holders earned a median income of only $59,436 in 2016.

One of the key drivers of the low earnings of so-called ‘skilled’ migrants is that the salary floor for Temporary Skilled Shortage (TSS) visas has been frozen at a pitifully low $53,900 since 2013-14, which is $19,000 below the median full-time Australian salary of $76,900 (comprising both skilled and unskilled workers).

Joanna Howe, Senior Lecturer in Law at University of Adelaide, explains the ramifications of this TSS wage floor as follows:

This crisis has been precipitated by the federal government’s decision to freeze the salary floor for temporary skilled migrant workers since 2013.

…the government has chosen to put downward pressure on real wages for temporary skilled migrants, thereby surreptitiously allowing the TSS visa to be used in lower-paid jobs…

But since 1 July 2013, TSMIT has been frozen at a level of A$53 900… This means that the TSS visa can increasingly be used to employ temporary migrant workers in occupations that attract a far lower salary than that earned by the average Australian worker.

With this background in mind, it is interesting to see the Migration Institute of Australia (MIA) – the lobby group for registered migration agents – is demanding that the federal government lower the $53,900 pay floor for ‘skilled’ regional workers to between $30,000 and $45,000:

John Hourigan, national president of the Migration Institute of Australia warns many migrants will find it difficult to meet the [$53,900] income threshold and it may expose them to exploitation.

“Many of the regionally based jobs these migrants will fill will be in the retail, tourism, hospitality and agricultural sectors, which are also predominantly part-time, casual and seasonal. To reach this $53,900 salary level, visa holders may be forced to work excessive hours or more than one job”.

“Many of these visa holders may never be able to meet this threshold requirement to progress to permanent residency, creating an underclass of migrant workers in regional areas,” Mr Hourigan said.

Over 5,500 people have signed an online petition calling on Immigration Minister David Coleman to reduce the Temporary Skilled Migration Income Threshold (TSMIT) to $30,000-$45,000. The petition argues that the proposed income threshold is much higher than a temporary resident in regional Australia can earn from ordinary employment…

“While the Government is telling regional Australia it is listening to concerns about skills shortages, they are going to make it as hard as possible to fill them, [Mr Hourigan said].

“They are also sending a clear message to skilled migrants that Australia does not want them.’’

I hate to burst the MIA’s bubble. But migrants working in “retail, tourism, hospitality and agricultural sectors” for between $30,000 and $45,000 are not ‘skilled’ workers. They are unskilled.

Lowering the TSMIT from its already abysmal level of $53,900 would only de-skill Australia’s immigration program even further, resulting in lower wage growth.

Instead of further debasing the skilled migration program, the wage floor for all skilled migrants (both permanent and temporary) should be set at the 80th to 90th percentile of earnings.

This would ensure that the scheme is used sparingly by employers on only the highest skilled migrants, not as a general labour market tool for undercutting local workers and eliminating the need for training.